How to charge a boat battery with a car/ vehicle: Step by step guides

The technology of batteries and chargers always keeps up with incredible advances with modern designs for cars and boats. Different purposes are served by each of these modern boat batteries where each has been designed with various advantages where disadvantages may occasionally follow. At one point, regardless of the battery type being deep cycle or cranking they must be recharged. Here we discuss step by step guide how to charge a boat battery with a Car or Vehicle.

Another significant aspect of marine batteries regardless of the variety- AGM, flooded, gel, or even Lithium-ion is that their response to charging may be different. The usage of proper and right battery charger renders to preserving the lifespan of your boat’s batteries.

Some people take boat batteries hugely for granted just as they would for car batteries and let it sit all winter thinking an occasional charging blast will keep it sane. The result will just become heavy for your wallet with a need for new battery purchase about every alternative year.

Depending on the storage method and area per month a battery can lose a max of 30% of its charge just sitting around. This justifies as one of the factors that badly strike the battery charging and loss that most people barely consider.

Such factors can be a state of discharge, battery age, temperature, and humidity, etc. Consider batteries as young children that need timely loving care in the name of maintenance.

The fit battery purchase is a small part of the whole scenario for the intended task but what ultimately ensures necessary power availability is maintaining that battery health with the proper maintenance and charging.

Modern boats are more generalized d with sophisticated sensors, pumps, and computers for a newer model outboard. For this reason, these boats must get enough starting power. And these battery types are projected particularly to start the boat’s main engine.

The alternator replenishes the used energy inside easily and quickly when the motor is active. You can always figure out the amps in the owner’s manual. So, for the recommended Marine Cranking Amps (MCA) check the book. MCA is a measurement of a battery’s number of amps to be delivered at 0°F for half a minute without dropping below from 7.2 volts rating.

Such battery types are technologically advanced to power on-board electrical accessories. A deep cycle is a concept of using slow-rated energy without having to get re-charged until the day ends.

So, they can be dependably used in advances like GPS, trolling motors, radios, or fish-finders. Deep-cycle batteries provide more strenuous discharge while withstanding the sternness of hundreds of discharge/recharge cycles which cranking batteries fail to achieve. This deeper battery type requires a different design type of thicker and fewer lead-plates to will defy the deep cycling.

While it is very possible to charge a deep cycle battery from your car, one warning must be added. The deep cycle battery you are aiming to charge must be a 12-volt battery. Batteries like a 6-volt golf cart cannot be charged in this way without both the vehicles getting damaged. Attaching the starting battery and the deep cycle in parallel connection will charge them.

Nonetheless, discharging these battery types over 50% as it has the probability to shorten the battery lifespan drastically. During the power breakdown, having the deep cycle battery type is wired to the car the whole time necessitates a battery isolator. It prevents the car from starting while insuring the starting battery is not discharged.

The requirement for a battery isolator comes because the alternator of a car or a boat is not very dissimilar from each other. Both of them have voltage regulators included to ensure a slow charge for the battery to near a full charge simultaneously prevents boiling all batteries.

But remember, the need for an isolator comes only if the deep cycle battery is supposed to stay connected the whole time. But for a simple charging process, unhooking the battery should suffice.

Another addendum must be added where the engine speed should be brought up to around 1500 rpm. It will alter the alternator movement into turning faster that renders a higher rate of charging. At 500–700 rpm the alternator has an idle speed so it will be unable to produce moderate charging capacity.

Swapping out the batteries will make the fully charged car battery be overcharged while the other battery primarily intended to be fed will instead take longer in the process since the same charge rate will be sent to both batteries by the alternator.

Technically deep cycle batteries are processed with thicker plates. Now, Start by checking connections for loose ones because they can make the batteries seem dead even though they have a full charge. The marine battery should stand in parallel against the car battery.

The car battery must not go through any disconnection made when fully charged itself. The marine battery’s charging procedure will be controlled by the alternator of the idling engine. Nonetheless, a 12-volt batteries hook simply up to an alternator.

However, for 6-volt batteries, they need to be cabled in series. The minus pole of the first battery must have connectivity with the second battery’s plus pole for a voltage additive of 12-volts.

For the connectivity of the charger, have the plus pole of the first battery and the negative pole of the second battery screwed in. You have to sit back for hours until the boat battery finally has charged.

While following through the charging process, maintaining is also required. For the marine battery, the charge rate and full charge voltage are generally available over the battery body and also, online. Cautionary steps include cordoning the area off to vulnerable beings- animals and children and being alert of stealing. 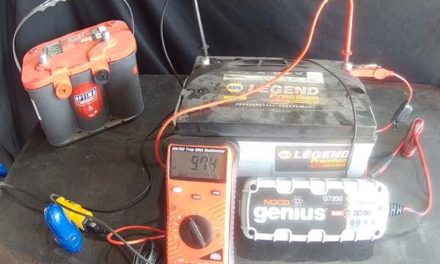 How to charge AGM battery: Step by Step Guide

What Is a Marine Battery – Advance tips and Tricks

How to Charge RV Batteries Properly – Battery Guide For Beginners

This site uses Akismet to reduce spam. Learn how your comment data is processed.