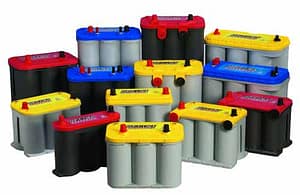 The thing with electrical tech is that figuring out the real cause behind why the battery is acting funny is hard. Optima batteries in this term are different from a mainstream battery due to the construction where figuring out what has gone wrong can be possible with several tools. You are reading this article because you felt your Optima battery is not working and we will help you to figure out How to tell if an optima battery is bad. If your Optima is bad besides determining whether the Optima is salvageable.

Starting batteries own the structure where they discharge and then need to get charged up and the charging system handles it fairly quickly. The basic idea includes skimming off the electricity by the starter to start up where it refills rapidly once a startup has functioned.

On the contrary, deep-cycle batteries have the functionality of getting discharged in large amounts and charges up later. To elaborate, equipment like the stereo, winch, on-board 12-Volts fridge, etc. tends to consume a high amount of electricity from these types of batteries which then it’s refilled by your charging system.

How to Tell if an Optima Battery is Bad: Step by step

A few couples of tools are required to check the functionality of your Optima. The first tool that needs to be utilized is a voltmeter or multimeter- both will do its job. Since the battery voltage is needed to be measured, set the meter correctly.

If the multimeter has the 20 VDC position, switch to that option. Now, the voltage you are getting from your Optima must show accurate readings that cheaper meters are unable to provide. Regulate the reading with proper meters for more accurate ones.

For the battery test-load, here, a vehicle is more helpful and a helper is always a plus. The last required tool is the charger with the functionality of charging AGM batteries. Many people are unaware of mainstream battery chargers being unable to treat an Optima battery discharged under 10.5-Volts.

However, as an Optima-specific charger alternative to you can count on a regular battery and its charger to charge the drained Optima.

Some people overcomplicate possible solutions and problem diagnosis for some reasons. The battery connections require attention for corrosion and tightness before concluding that your Optima is dysfunctional.

Because this is simply the most common happening that people face regarding batteries, but this problem is often not checked, and to be sure, you have to;

Clean corrosion until you find a clean, and bare-metal connection with the help of sandpaper. With a wrench, you can turn clamps and other connections tighter reasonably. Be careful about damaging the battery post due to more than enough tightness. Again, one of the easiest fixable problems is bad grounds particularly and bad connections but they end up being the last checks often. So, always remember the battery connections has to be looked into first.

Before the beginning of this stage, you need to ensure the Optima is charged. The battery can be considered charged if it was being driven around or stick up with a charger for a bit.

For elaboration, the state of the Optima being charged means it has not been freshly tested or has just come out of storage after sleeping for half a year. Hence, the Optima is supposedly at the normal stage.

Before initializing the process, understand that the applicable voltage range here is 12 volts DC. So, if you can manage a multimeter, have it switched to 20VDC.

Any reading that belongs to this range refers to a normal charge. It also states that you are associating with the proper range for an Optima.

If you find your Optima in the second range where it is showing charging is essential, it is simply stating that the Optima can hardly hold or take any charge. Usually, it means your battery has fallen victim to sulfation. Now, sulfation is a process of gathering sulfate during the long time it had been idly sitting without being charged. It can also occur if a battery is deeply drained or simply, old.

This range states the highly drained but recoverable stage. Generally, 0-volts refer to a short inside the battery or its need of being replaced. However, at a low voltage reading, the probable sulfated state is indicated that often needs a replacement.

Even though the Optima voltage shows alright, it may barely hold a good performance under load. You can get help from an auto-parts store for a load test. It is easier since battery testers are available to such stores nowadays or owning a multimeter can allow you to do it on your own.

The process of load test includes hooking the Optima up to a vehicle and while the starter is running. Here, you need to look into the voltage:

With the multimeter set at the previous position (20VDC) or voltmeter of 12-volts DC range, attach the red probe and the positive Optima terminal where the black probe should touch the negative Optima terminal. This is where an additional helper is required who needs to start the 4×4. But if you are solo, a windshield can hold your meter. You can take long alligator clips to the Optima and watch the meter while the starter motor turns.

We are applying a heavy-load at the over the engine cranker-motor start-up for seeing the battery performance. The alternator, when it starts to spin, begins to raise the voltage. Alternator voltage is simply stating about the charging, not the Optima condition so it can be overlooked.

However, if the battery fails to hold the voltage between the mentioned ranges of (9.5-10.5) volts for the half-minute period, your battery is usually one of two:

An open-cell or excess sulfation

And either of them means the battery is fried. Although the open cell gives an image of Optima doing well in no-load testing, the heat in the battery caused an expansion rendering to lose connections. Terminal contacts, in the same way, can internally crack or break. The connection is functional when still cold with the intact current flow but as soon as they warm up, the contact breaks. I think this helpful article for how to check if an optima battery is bad.

We are dedicated RV and travel enthusiasts who created this site to provide relevant information to like-minded readers who are seeking knowledge and enjoyment from RV travel, camping, life on the road, and all the challenges and splendors that come with it.

We use cookies on our website to give you the most relevant experience by remembering your preferences and repeat visits. By clicking “Accept All”, you consent to the use of ALL the cookies. However, you may visit "Cookie Settings" to provide a controlled consent.
Cookie SettingsAccept All
Manage consent

This website uses cookies to improve your experience while you navigate through the website. Out of these, the cookies that are categorized as necessary are stored on your browser as they are essential for the working of basic functionalities of the website. We also use third-party cookies that help us analyze and understand how you use this website. These cookies will be stored in your browser only with your consent. You also have the option to opt-out of these cookies. But opting out of some of these cookies may affect your browsing experience.
Necessary Always Enabled
Necessary cookies are absolutely essential for the website to function properly. These cookies ensure basic functionalities and security features of the website, anonymously.
Functional
Functional cookies help to perform certain functionalities like sharing the content of the website on social media platforms, collect feedbacks, and other third-party features.
Performance
Performance cookies are used to understand and analyze the key performance indexes of the website which helps in delivering a better user experience for the visitors.
Analytics
Analytical cookies are used to understand how visitors interact with the website. These cookies help provide information on metrics the number of visitors, bounce rate, traffic source, etc.
Advertisement
Advertisement cookies are used to provide visitors with relevant ads and marketing campaigns. These cookies track visitors across websites and collect information to provide customized ads.
Others
Other uncategorized cookies are those that are being analyzed and have not been classified into a category as yet.
SAVE & ACCEPT